I wrote on Offline Domain Join (ODJ) a while back where I used PowerShell to rebuild a “djoin-compatible” file from the djoin.exe output in a format that djoin would accept. In my scenario at the time, I couldn’t pass the file generated by djoin directly.

What is the djoin.exe you may ask ? this is a tool provided by Microsoft that allow you to join a machine to an Active Directory domain without network connectivity. The operation happens in two phases: First you run djoin on a machine connected to Active Directory which output a very long string of text (or a file directly with that string), in a second part you provide this file to djoin on the machine that need to be joined to complete the operation.

The article I wrote at that time was focused on the second phase. I was still using djoin.exe for the first phase. 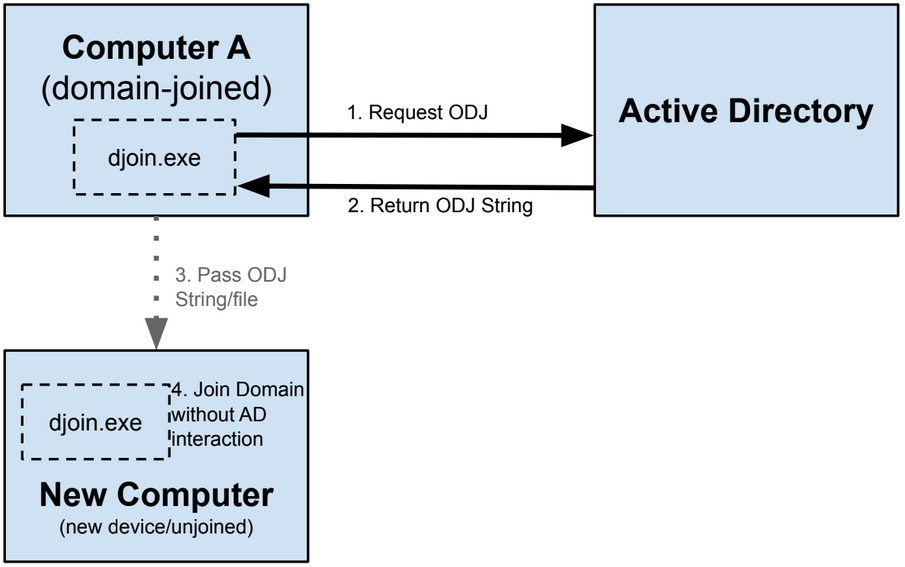 More recently, I was facing another djoin problematic scenario.

I had to create an automation to stage new device(s) in different systems, including SCCM and make the device ready to boot from SCCM OSD and start applying an OS + Configuration.

Here is an high-level flow: 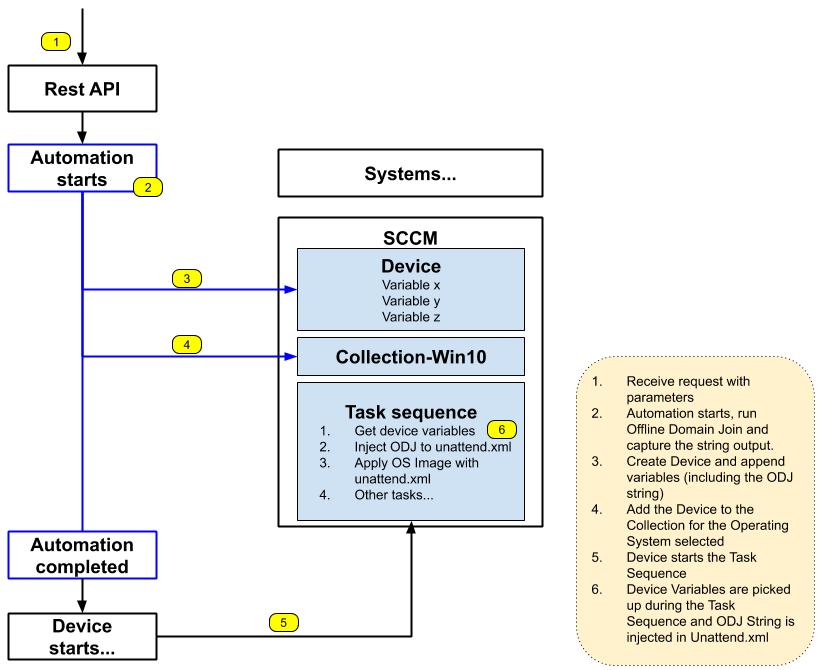 This was working really well, the whole Stage process was taking 3-5 minutes. However one of the tasks that was costly in time was the ODJ part. This automation needed to run very frequently so it started to become a bottleneck for the entire workflow where hundreds machines needed to be deployed at the same time.

Djoin was slow mostly because:

On a side note, in this scenario the second part of the djoin was handled by unattend.xml file inside the SCCM Task Sequence, the djoin string was appended to it.

Alternatively you could still use the approach shown in my previous ODJ blogpost.

I spent sometimes looking for a solution that could expedite the ODJ step while using the entitled AD account. I tested different approaches but ultimately ended up using a combination of PowerShell and c#

While investigating on P/Invoke around [NetJoinDomain], [NetGetJoinInformation] methods, I found the following code snippet from Ryan Ephgrave which was using PowerShell/c# to join a Nano Server during WinPE.

For my need, this was working great during my initial tests on W2008R2 but I had to update the code a bit to make it work on Windows Server 2012/2016+ versions.

Overall this approach saved a lot of time and run in seconds compared djoin.exe.

This will create an object in active directory and output the blob needed to join the machine offline.

The code is available on GitHub.

Microsoft recently released a new version of PowerShell, this post is a quick run-through the new features and new cmdlets that I presented at the last Frenc...